Conversion of fuel oil to natural gas for heating buildings in New York City has been under way for several years now.

According to the New York City’s Mayor’s Office of Sustainability,

Just 1 percent of all buildings in the city produce 86 percent of the total soot pollution from buildings-more than all the cars and trucks in New York City combined. They do this by burning the dirtiest grades of heating fuel available, known as residual oil, or #6 and #4 heating oil.

Thanks to a 2011 City Regulation put in place during the Bloomberg administration, fuel oil types #4 and #6 are being phased out. Buildings that burn fuel oil will either need to convert their boilers to dual fuel, convert to natural gas or purchase ultra-low sulfur Number 2 oil (see below, from the same site).

In April of 2011, upon the release of the PlaNYC update, Mayor Bloomberg finalized a New York City Department of Environmental Protection (DEP) rule (in PDF) that will phase out the use of two highly polluting forms of heating oil-Number 6 oil (No. 6) and Number 4 oil (No. 4). The regulations were designed to balance near-term pollution reduction with minimizing costs for buildings. Details are below:

Fuel oil to natural gas conversions are happening all over New York City–and throughout the Northeast. The motivations are not only environmental, they’re economic as well. The following graph from the Massachusetts Office of Energy and Environmental Affairs presents the case convincingly: 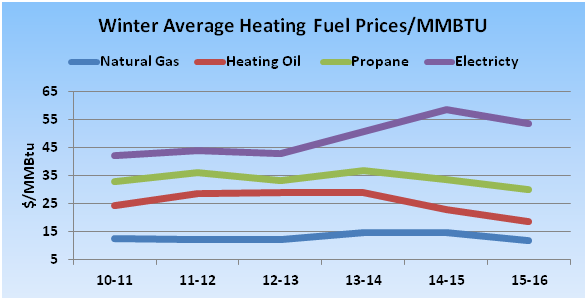 There are good reasons to evaluate all options before making a choice. Most residential buildings are expressing a preference for natural gas, since it is both lower cost and burns more cleanly than fuel oil.

What should a building consider when contemplating a conversion?

2. What does the project financing entity expect in return for financing your project? Do they expect a long term contract with your building? What do you give up by making a longer term commitment to one entity?

What to do, what to avoid?

Insist on transparency in every step of the process

Build in an extra 6 months of delays, permitting issues, etc.

Get forward market transparency on any long term agreement that you are considering signing to finance a project.

Don’t agree to a price 2 years before the contract starts, especially if you have no visibility into forward prices. Why? Because signing a contract now for a 4 year term when the contract won’t start for another 2 years will most certainly bring significant additional premiums– the greater the uncertainty, the higher the supplier premiums.

Bottom line for buyers: Our message is simple and consistent– insist on transparency, simplicity and clarity.