Top 3 benefits of an energy controls upgrade for a NY City Hotel: Results

The Megawatt Hour periodically highlights energy case studies to expand access to energy efficiency programs and projects. This post and the prior one highlight one such case study in which an energy controls upgrade significantly improves the operation of a four star hotel in Midtown Manhattan. This post reviews the impact and payback of the upgrade. The first article describes the impetus and project background.

This hotel has six sets of duplex pumps. Duplex pumps are used when the highest reliability is required. They are used for those systems where the system can’t be down even for servicing. One pump runs while the other is held in reserve in case of trouble. The system swaps the active pump based on a schedule. In case of failure, the reserve pump is automatically activated, and the troubled pump is disabled and an alarm is sent via email and text.

The Solution: Controls and HVAC Management

We installed Variable Frequency Drives (VFDs) in two of the duplex systems, which allowed the pumps to run at a slower speed. The original control system was unstable, so the building engineer disconnected the system. Instead of controlling the VFDs, the building ran the two pumps at a fixed speed of 70%. For the upgrade, we installed VFDs at two additional existing sets of pumps. After completion of the project, we identified two other pump pairs for VFD upgrades. Both installations will achieve better than a 3 year ROI.

Chillers create cold water for use by coils through the building to cool the air. The pumps move the water from the chiller to the different coils around the building. Chillers consume power based on the difference in temperature between the chilled water they create and the water temperature from the cooling tower. We identified the opportunity to minimize the total energy consumed by monitoring the outside conditions of temperature and humidity and the amount of cooling required. Based on these measurements, we determined that we could partition load between the chiller and the cooling tower to lower energy consumption.

Currently, with the installation of this control system, this hotel can turn off the chiller and only use the cooling tower to remove heat from the building. The system can use this option when the outside temperature is below 45 degrees. In the newer buildings with improved insulation, we have seen buildings that need cooling down to 35 degrees.

Before management approved the project, we calculated the savings expected from the new controls and VFDs and determined that a three year ROI was a conservative estimate for the investment. Corporate monitoring and internet connections were bonuses that came along for free with the project.

First, there were zero guest complaints as the hotel transitioned from the prior limited BMS system to the new system. Second, management was able to achieve their stated goals of reducing energy use to best in class; and creating a compelling return on investment for the project.

The comparison between 2019 and 2020 is reasonable as the two years have a similar temperature profile with the exact same average of 50 degrees across the three months.

Thanks to additional savings that we identified during the project, the current expected ROI is 1.2 years versus our original estimate of 3 years. During the implementation we identified additional opportunities for gas savings. In addition, the programmable nature of the systems enabled improvements in boiler and heating pump control.

In fact, partial load is where savings occur. A typical  NYC hotel runs at 100% rated cooling load only 70 hours per year (0.7%). Thus, the partial load condition is where improved controls make a difference. The chart below shows the electricity consumption change when the hotel fully activated the new controls system at the end of February 2020. 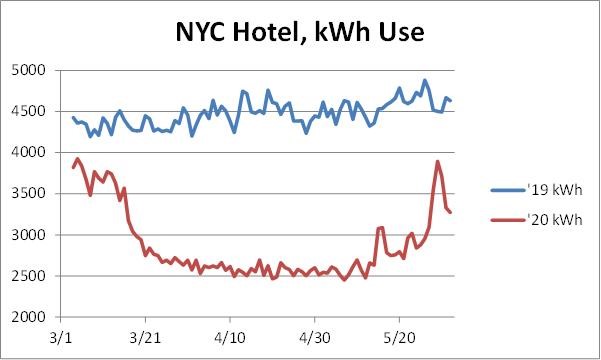 The table below shows the kilowatt hour savings for each of the three months of hotel operation in 2020. 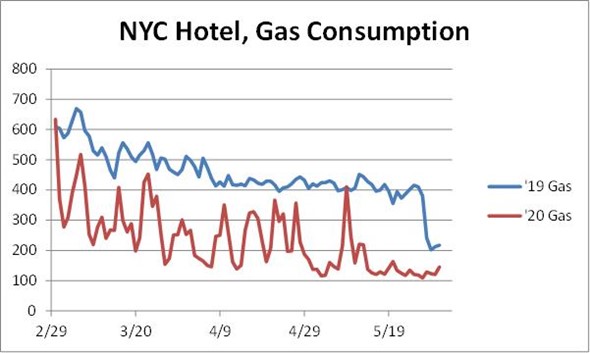 To follow is a table comparing the gas savings month by month.

Low Occupancy Effects due to Covid-19 in March 2020

It is a fair question and one that we investigated.

First, we reviewed the daily occupancy numbers, the outside temperatures, the electric, gas, and water consumption during the first three weeks in March. As the US and New York City improved global travel restrictions, occupancy dropped from ~ 100% to less than 10%.

The regression test for electricity usage show that low occupancy allows the controls to reduce electric demand. It is this lower load that the system senses and then adapts the cooling systems to reduce energy consumption. 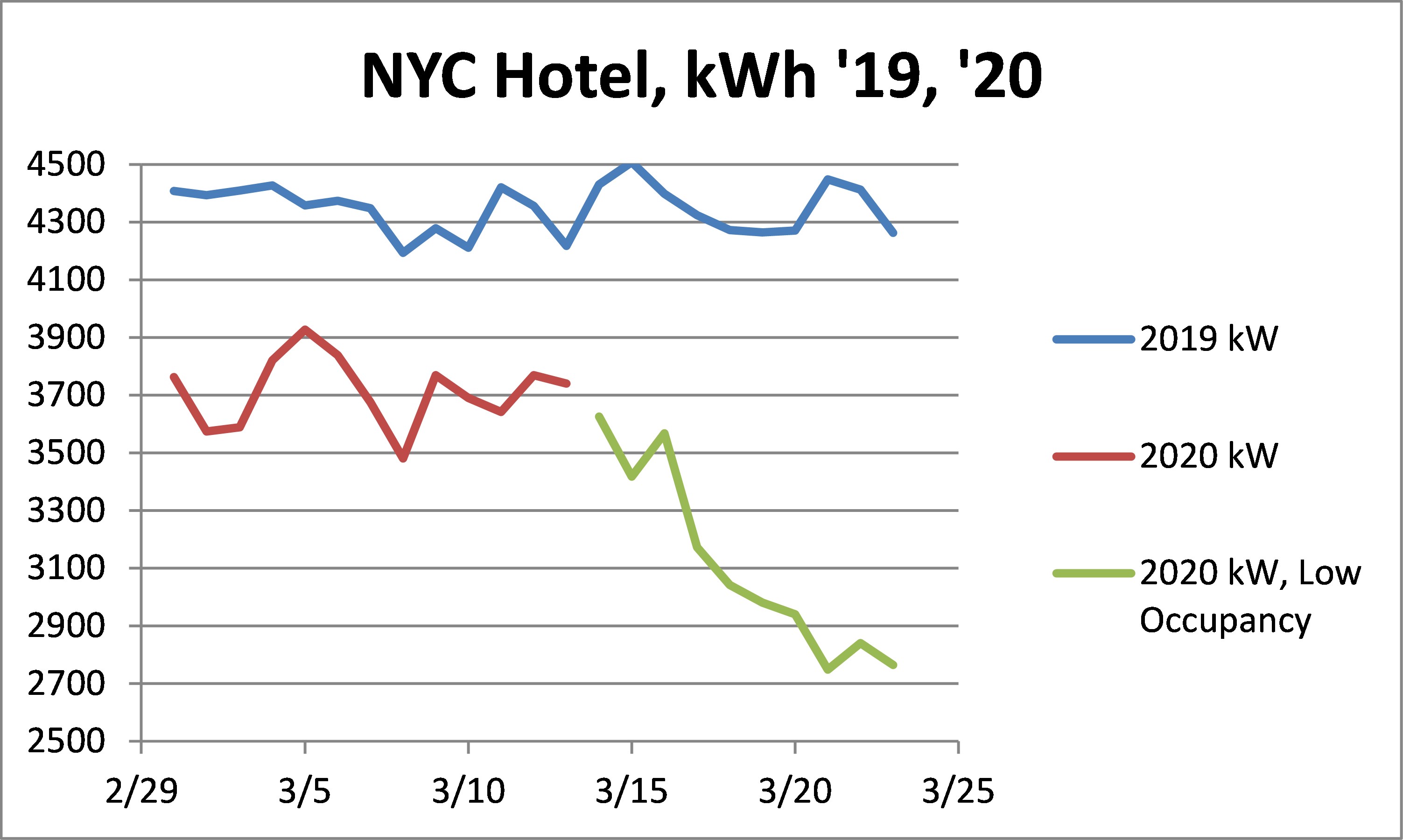 The above chart illustrates the upgraded controls delivered savings of approximately 15% with high occupancy. As the building occupancy dropped, the controls automatically scaled back power consumption, saving 41%.

The upgraded controls automatically cut power due to the lower load, while a similar building didn’t reap those potential savings. Matching the energy use to the load is the heart of the optimized system versus the standard solution of running the building 100% of the time for worst-case conditions.

Bottom line for hospitality management, energy and finance professionals: A four-star hotel in NYC is achieving a 1.2-year return on their investment in a control system upgrade with complete customer satisfaction. Furthermore, the hotel added both corporate monitoring and email and operational text alerts as a bonus of using a system solution created by TSI Group LLC.